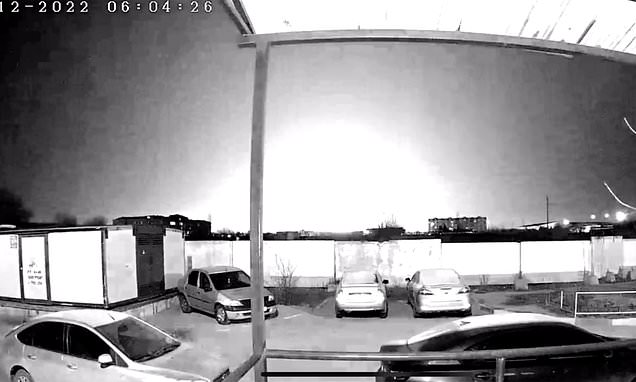 A Russian airbase where a major attack was being prepared against Ukraine has been hit by a suspected drone attack that damaged two long-range bombers.

The Engels-2 airbase, near the city of Saratov, was hit by an explosion in the early hours of Monday that left two Tu-95 bombers – which have been used to carry out airstrikes on Ukraine’s infrastructure – damaged.

Another explosion also hit Russian military base near the city of Ryazan, killing three people and wounding five after a fuel truck detonated.

Kyiv has not claimed responsibility for the blasts but is widely thought to be behind dozens of similar strikes on bases and supply depots on Russia’s western border.

An explosion struck the Engels-2 airbase near the Russian city of Saratov this morning, leaving two long-range bombers damaged

Engels-2 and Ryazan are located between 300 and 450 miles from the Ukraine border which is beyond the range of Kyiv’s missiles, meaning the attack is likely to have been carried out by a drone.

Hours before the blasts, Ukrainian arms firm Ukrobonoprom claimed to have successfully tested a suicide drone with a 165lb warhead that would be capable of ranging both locations.

The explosion also comes after satellite images were released last week showing bombers at Engels airbase being prepared for an attack on Ukraine.

Pictures showed a mixture of Tu-95 and Tu-160 planes being refuelled and armed with cruise missiles, as analysts warned a ‘large scale’ attack on Ukraine and its vulnerable energy networks was likely to be ‘imminent’.

A resident in Ryazan said: ‘Everything in my house flew off the shelves. I thought the windows would fly out, horror. We live not far from the take-off zone.’

Another said: ‘The blast wave broke the latch on the window and flung it open. You could see a column of smoke and sparks.

‘The explosion was a single one, strong. There was no exact sound of something falling before the explosion. It looks like a fuel tank explosion to me.’

Marina Orlova said: ‘I heard it, I woke up. The sound was very bad.’

Russian news outlet Readovka said both the explosions were at airfields used by Moscow to attack Ukrainian infrastructure.

The Readovksa report confirmed there was damage to two Tu-95MS planes.

CCTV shows the moment of the explosion at the Engels-2 airbase, with Ukraine widely thought to be behind the attack

It said the Ryazan attack was likely to have been carried out using a drone launched from inside Ukraine, but raised doubts about the Engels attack.

‘If in the case of the Ryazan region it can be assumed that the UAV was launched from the territory of Ukraine, then there are doubts about Engels.

‘With a high degree of probability, the drone [was launched] from our territory, which means that enemy [operatives] have already reached the banks of the Volga River.

‘If the drone came from Ukraine, then our enemy already has technology with a range of 1000 km, which means that Moscow could be under attack.

‘There is only one conclusion: counter-terrorism measures on the territory of the Russian Federation should be strengthened to the maximum, retaliation strikes should be continued tenfold.

‘Until the Russian response has a massive effect, such attacks will continue.’

On the Engels attack, a local Natalia Gulyaeva said: ‘Almost the entire city heard, even in Saratov, and the authorities are silent as usual.

‘They are hiding the truth apparently, [giving] no information on the subject.’

Resident Anatoly Silin posted: ‘Enough of this war. It has come to every home now, it’s time to stop.’

There was fury from pro-war channels about the lack of protection for the major Russian military airfields, and their vulnerability.

Vladlen Tatarsky posted: ‘Who can say which academy teaches that airfields must be guarded during a war?

‘Or is it a secret sacred knowledge that is transmitted only to the chosen few?’

Saratov region governor Roman Busargin: ‘Dear residents, information about a loud explosion and outbreak in Engels in the early hours of this morning is spreading on social media and the media.

‘I would like to assure you that no emergencies have occurred in the residential areas of the city.

‘There is no cause for concern. No civilian infrastructure was damaged.’

However he did not deny a huge military humiliation for his Kremlin political masters.